I committed to a huge chunk of work for the Beach House Inspiration post, but I’m proud of the results and the house feels lighter.

I started with Task 2, which was the hardest: reduce quantities of *select items in specific storage spaces: *linen closet for towels and extra bedding, kitchen counter “stuff” that isn’t for food preparation, and mud room for extra shoes, boots, and flip flops.

Before – kitchen counter – the worst place for a drop-zone. 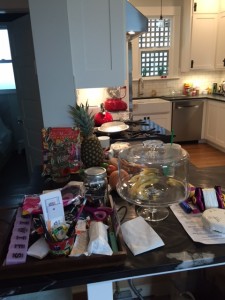 After – a placemat increases discipline to keep the space clear for eating or working at the counter. 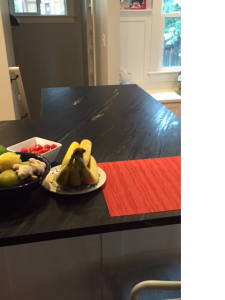 After – the tray that enabled a drop-zone and served as a dangerous catch-all had to go. 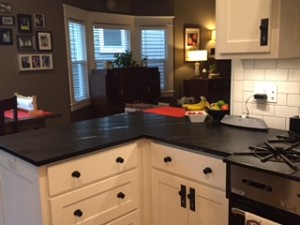 Task 2 nicely merged with Task 4: move incomplete projects to a master list, then to a plastic bin, and store properly. 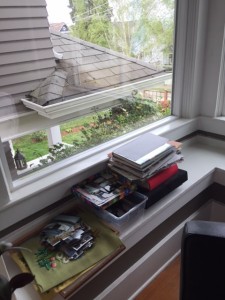 Before – piles and a bin. 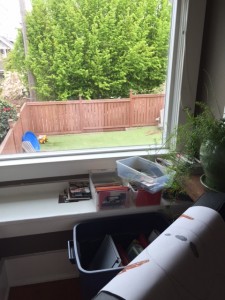 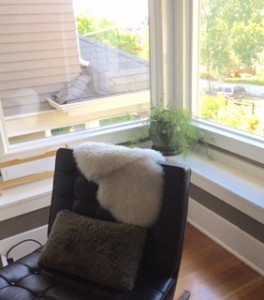 Before – Piles on top of bins, framed photos, kids artwork, and mystery items. 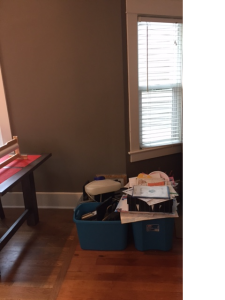 During – most of a day spent planning the arrangement, spacing, and hanging. 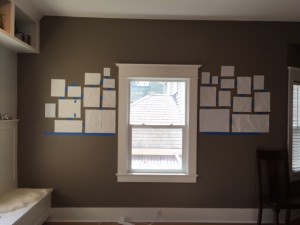 After–ish – still in progress but 2 large bins of frames hung up and cleared out. 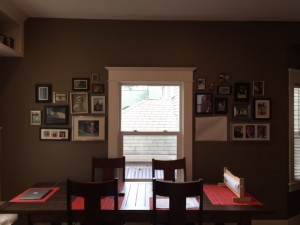 After – only 1 bin remains visible which are the photos needed to complete the wall collage. 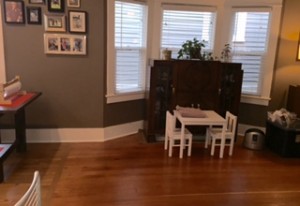 Task 3 was the most fun: place charming baskets or pails outside each entryway for kids to store their “treasures,” muddy boots, sandy crocs, and wet umbrellas. Squeeze in a potted plant that can survive the traffic level.

After – front door (close-up) softened with palm-grass and warmed up with red pots full of seedlings that will burst with color in a few weeks. 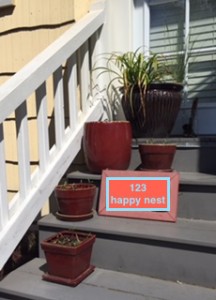 Before – back entry off the deck, originally built for relaxing, now a high-traffic drop zone, narrowed by bags and shoes. 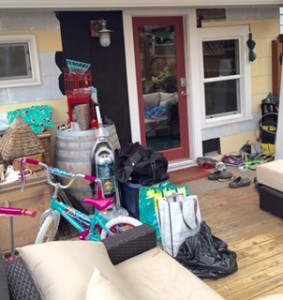 After – back entry (close-up) after removing clutter and added flower pots. 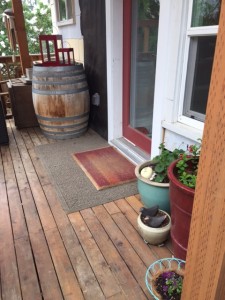 After – back entry with less stuff feels great, even with the Cinderella kite watching us. 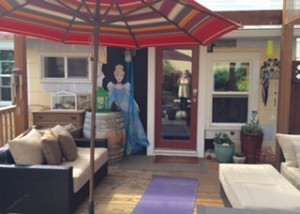 Task 1: create a space meant for one solitary purpose: do nothing but relax and unwind here.

I assumed that my office/craft room would be the space for relaxing and unwinding since it’s the one space that is all mine. But something surprising happened!  My kids opened up the storage box where we keep seasonal shoes and other items that get shoved there. I thought they were going to take out all the rain boots, garden clogs, and crocs, but they found my yoga matt and unrolled it on the deck.  And just like that, my space meant for relaxing and unwinding was complete.

Beach House Inspiration Update – Before and After May 5th, 2016happynest